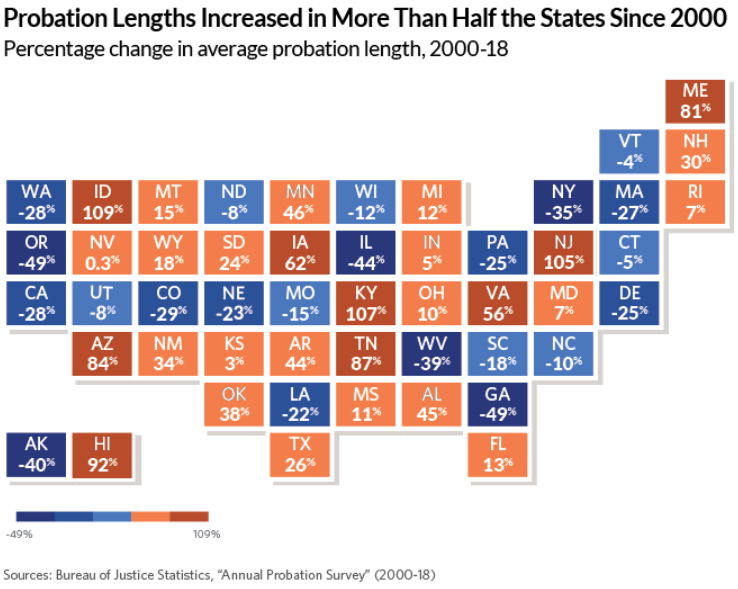 More than 3.5 million, or 1 in 72, adults were on probation in the United States at the end of 2018—the most recent year for which U.S. Bureau of Justice Statistics (BJS) data is available—more than triple the number in 1980. Nationwide, on any given day, more people are on probation than in prisons and jails and on parole combined.

At its best, probation—court-ordered correctional supervision in the community—gives people the opportunity to remain with their families, maintain employment, and access services that can reduce their likelihood of reoffending while serving their sentences. But, as previous research by The Pew Charitable Trusts has shown, the growth and size of this population have overloaded local and state agencies and stretched their resources thin, weakening their ability to provide the best return on taxpayers’ public safety investments, support rehabilitation, and ensure a measure of accountability. One key factor driving the size of the probation population is how long individuals remain on supervision.

A growing list of high-quality studies have shown that long probation sentences are not associated with lower rates of recidivism and are more likely than shorter ones to lead to technical violations—noncompliance with one or more supervision rules, such as missing appointments or testing positive for drug use. Recent research from the Council of State Governments has found that such violations contribute significantly to state incarceration rates and correctional costs: More than 1 in 10 state prison admissions are the result of technical violations of probation rather than convictions for a new crime.

To date, the average length of probation has not been well documented, because data on individual terms has been lacking. To begin addressing this gap and help criminal justice stakeholders better understand how long people spend on probation—as well as the effects of term length on individual recidivism outcomes— The Pew Charitable Trusts conducted an in-depth analysis of BJS data from 2000 through 2018. Additionally, Maxarth LLC examined Oregon and South Carolina data to quantify the potential to reduce probation lengths without increasing re-offending in those states, and the National Conference of State Legislatures (NCSL) reviewed probation sentencing statutes in all 50 states. This report provides a first-of-its-kind national and state-level portrait of the average length of probation and explores whether term lengths can be safely reduced and what options are available for state policymakers looking to improve their system’s outcomes.