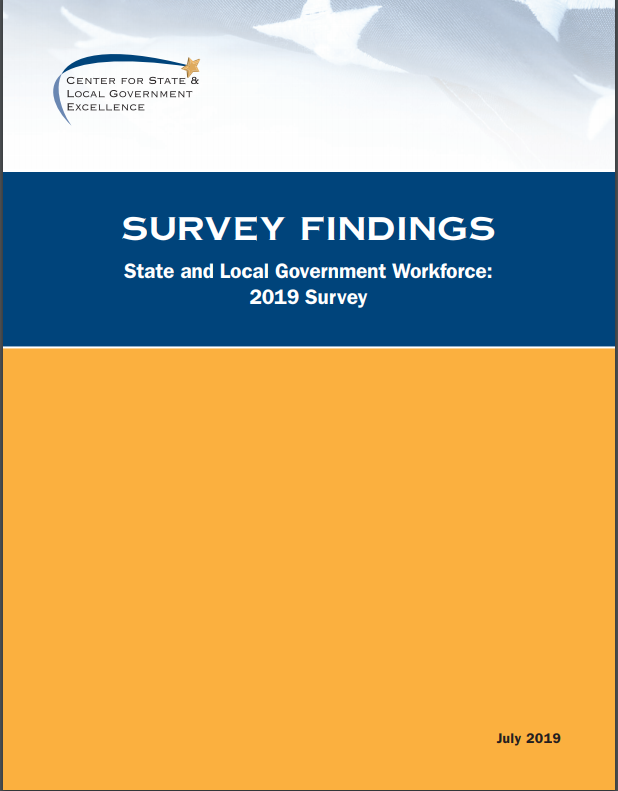 The Center for State and Local Government Excellence (SLGE) has partnered with the International Personnel Management Association for Human Resources (IPMA-HR) and the National Association of State Personnel Executives (NASPE) to conduct an annual survey of public sector human resources professionals since 2009. Survey questions are focused around the workforce changes and challenges their organizations face and the initiatives they put in place to better serve their hiring and retention needs for the future.

This survey was sent to 7,152 members of IPMA-HR and 85 members of NASPE. The online survey was conducted from March 20 to June 3, 2019 by the Center for State and Local Government Excellence (slge.org) with 335 public human resource professionals submitting responses. Unless otherwise noted, charts in this report reflect 2019 data. While a small number of respondents represent federal or other sectors (e.g., non-profits), the data displayed in Figures 2 through Figure 21 represent state and local government respondents only.

While a few of the figures in this report include data from prior survey years, a more longitudinal analysis is available in the 2018 report: "State and Local Government Workforce: 2018 Data and 10 Year Trends".

Hiring and layoffs are key indicators this survey tracks. While hiring has changed modestly in recent years, the share indicating they have instituted layoffs has dropped from 42 percent in 2009 to 7 percent in 2019. Looking at longer-term employment projections, both state and local workforces are anticipated to increase, with a projected growth of 3.8 percent among state employees and 7.4 percent among local employees from 2016 to 2026.1

Benefits continue to be both a key strength for state and local government (with 88 percent indicating their benefits are competitive in the labor market), and an area for continued changes and experimentation. Some of those changes are in the form of adjusting employer/employee contributions to retirement or health care costs, while others have been more non-economic, such as flexible work schedules (51 percent; see Figure 13).

The gig economy is a particular focus for this year’s survey, with respondents indicating both the overall share of the workforce that such workers represent and the impacts on the organization as a whole (e.g., 3.6 percent indicating a significant increase in management flexibility and a total of 10.1 percent indicating a decrease in employee morale).

Finally, as organizations work to attract and retain skilled workers, they have found a variety of approaches to be of value, ranging from a focus on online advertising (83 percent) and social media (51 percent) to employee development programs such as in-house training (67 percent), onboarding (53 percent), and paid family leave (21 percent), as shown in Figures 12 and 20.