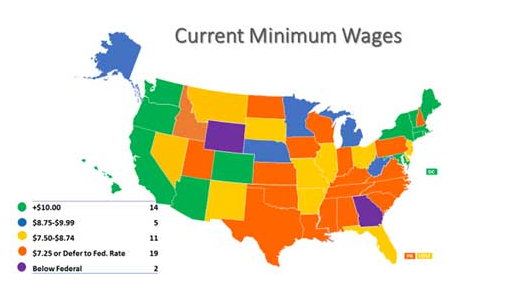 Illinois enacted SB 1 in February, which will phase in a minimum wage increase to $15 by 2025. The measure also adjusted the youth wage for workers under age 18 (it will gradually increase to $13 by 2025) and created a tax credit program to offset labor cost increases for smaller employers.

Maryland's legislature overrode a gubernatorial veto to enact a measure (SB 280) that phased-in a minimum wage increase to $15 by 2024 (with a delayed schedule of rate increases for smaller employers) and eliminated and the state subminimum wage for employees younger than age 20.

New Mexico enacted SB 437 in April, which will raise the state minimum wage to $12 by 2023. The measure also established a training wage for high school students and slightly increased the tipped minimum wage.