Gender Inequality, Work Hours, and the Future of Work 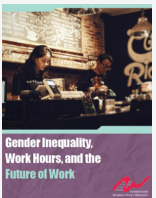 Technological innovation through machine learning, robotics, and artificial intelligence is likely to automate many tasks and jobs, thus improving productivity, freeing time, and allowing fewer workers to do more. Technological innovation presents an opportunity to rethink the distribution of time spent on paid and unpaid work, tackle the inequality in the division of domestic and care work between women and men, and provide time for upskilling and lifelong learning needed to benefit from future opportunities.

This first section of this report presents analysis on why work hours matter to gender equality, and what role time-related policies may play in reducing gender inequality, and more generally, social and economic inequality. The findings show women’s growing contribution to paid work and highlight that, as women’s average hours at work have increased, men’s have not declined. Inequality in paid and unpaid time has remained particularly stark between mothers and fathers. The report then highlights the growing inequality between those who work a lot and those who work intermittently, part-time, or part-year. In addition, the analysis shows that this polarization in paid time at work is increasingly exacerbating racial inequalities.

The second section of the report focuses on changes in the quality of time at work and workforce policies around scheduling, location, and paid time off. The report notes how a growing lack of schedule control and the absence of paid leave rights reinforce economic and racial/ethnic inequalities and are particularly harmful to parents.  The report ends with recommendations to achieve a healthier and more equal distribution of hours worked.