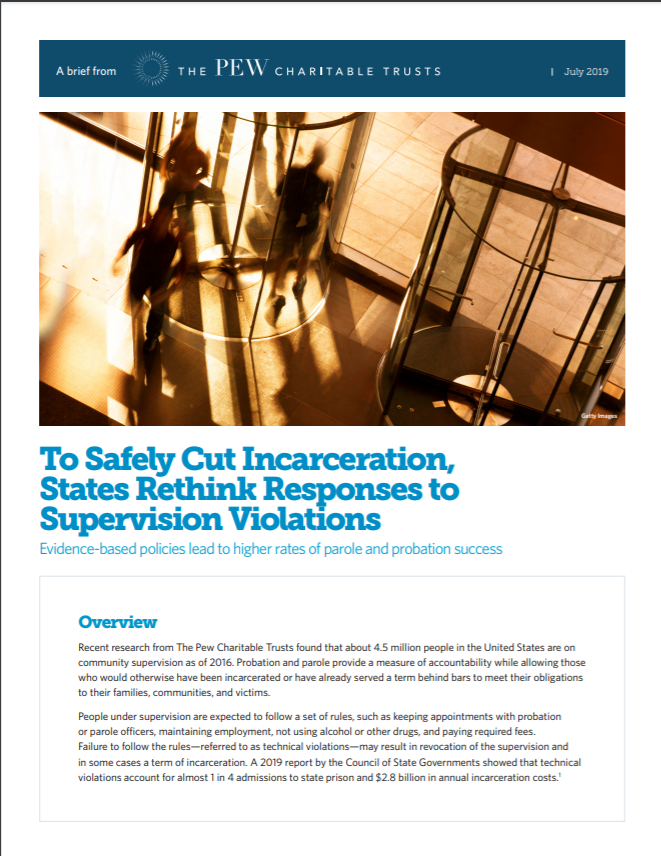 Recent research from The Pew Charitable Trusts found that about 4.5 million people in the United States are on community supervision as of 2016. Probation and parole provide a measure of accountability while allowing those who would otherwise have been incarcerated or have already served a term behind bars to meet their obligations to their families, communities, and victims.

People under supervision are expected to follow a set of rules, such as keeping appointments with probation or parole officers, maintaining employment, not using alcohol or other drugs, and paying required fees. Failure to follow the rules—referred to as technical violations—may result in revocation of the supervision and in some cases a term of incarceration. A 2019 report by the Council of State Governments showed that technical violations account for almost 1 in 4 admissions to state prison and $2.8 billion in annual incarceration costs.

Such technical revocations are costly, and failure to comply with supervision conditions does not necessarily indicate that a person presents a public safety threat or will engage in new criminal activity. Further, although studies have not demonstrated that incarcerating people for breaking the rules of supervision reduces recidivism, they have found that long periods of incarceration can make re-entry more difficult, causing people to lose  their jobs, homes, and even custody of their children.

This brief examines policies that states implemented through the Justice Reinvestment Initiative (JRI) that have reduced technical revocations, highlights some of the results of those changes, and provides sample legislation for each policy. JRI is a public-private partnership among Pew, the U.S. Department of Justice’s Bureau of Justice Assistance, state governments, and technical assistance providers; it seeks to improve public safety and control costs by prioritizing prison space for people sentenced for the most serious offenses and investing in evidence-based alternatives to incarceration and other programs shown to reduce recidivism. These state efforts have not been without challenges, and more can be done to improve supervision outcomes. Nevertheless, the examples provided show that states can take meaningful steps to reduce prison populations and protect public safety  while strengthening systems of supervision and services in the community.