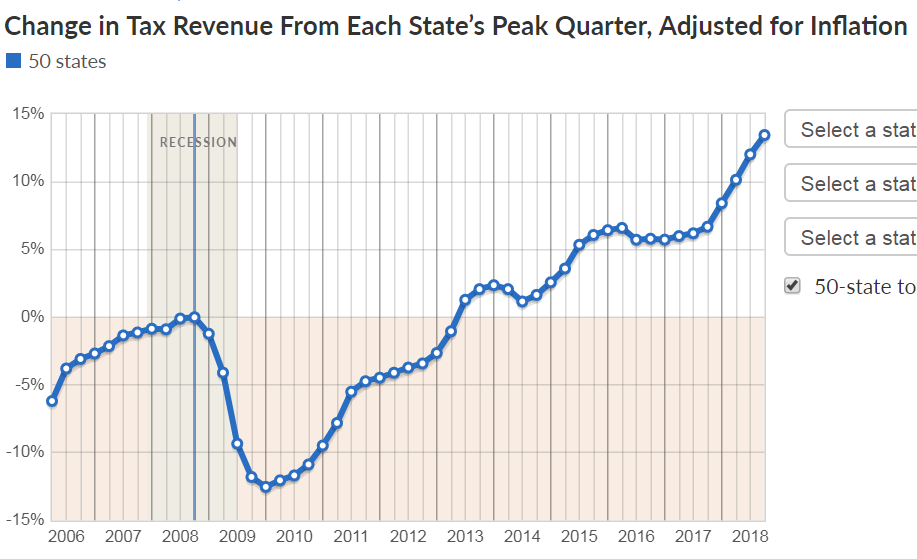 In ninth year of recovery, states’ fiscal and economic prospects perked up

After years of slow progress, states benefited from a more promising economic and fiscal environment in 2018. Pressure on state finances eased somewhat as the second-longest economic recovery gained momentum and state tax revenue jumped, at least temporarily. Still, not all states have fully recovered from the shocks of the Great Recession more than a decade ago. Some are in a stronger position than others as they gauge how long the recovery will last.

A surge in tax receipts provided budget relief for many states, though some of the extra money was due to short-lived effects from the federal Tax Cuts and Jobs Act. Tax collections in 41 states—the most yet—had surpassed their recession-era peaks by late 2018, after adjusting for inflation. The extra revenue led a number of states to add to their rainy day funds, which could cover a bigger share of spending than before the recession in at least half the states.

Economically, employment rates and growth are on the upswing. Still, the estimated share of prime working-age adults with jobs was lower than before the recession in most states at the end of 2017, and growth measured by state personal income still lagged historic rates.