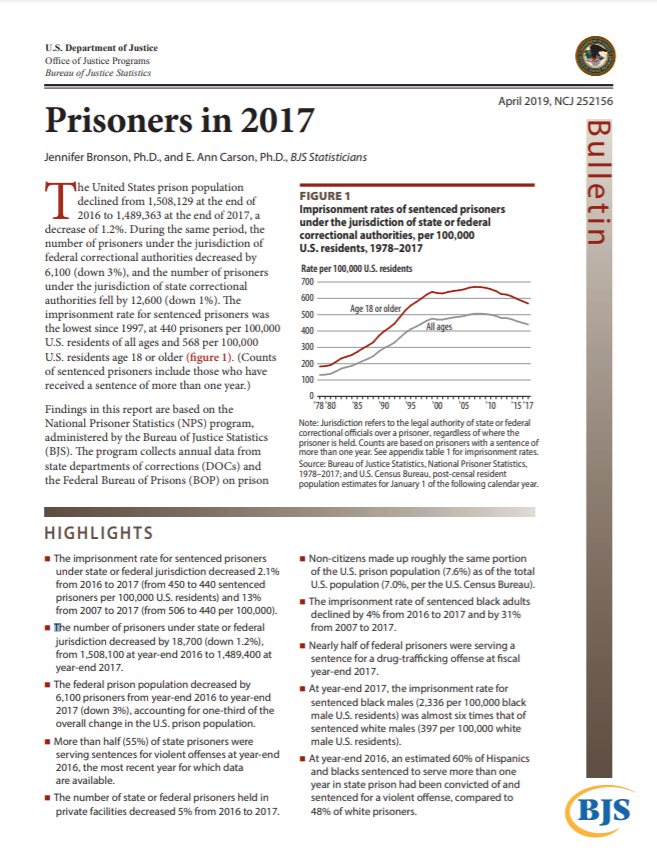 The United States prison population declined from 1,508,129 at the end of 2016 to 1,489,363 at the end of 2017, a decrease of 1.2%. During the same period, the number of prisoners under the jurisdiction of federal correctional authorities decreased by 6,100 (down 3%), and the number of prisoners under the jurisdiction of state correctional authorities fell by 12,600 (down 1%). The imprisonment rate for sentenced prisoners was the lowest since 1997, at 440 prisoners per 100,000 U.S. residents of all ages and 568 per 100,000 U.S. residents age 18 or older. (Counts of sentenced prisoners include those who have received a sentence of more than one year.)

Findings in this report are based on the National Prisoner Statistics (NPS) program, administered by the Bureau of Justice Statistics (BJS). The program collects annual data from state departments of corrections (DOCs) and the Federal Bureau of Prisons (BOP) on prison capacity and prisoner counts, characteristics, admissions, and releases. This report is the ninety-second in a series that began in 1926. Forty-eight states and the BOP reported NPS data for 2017, while data for New Mexico and North Dakota were obtained from other sources or were imputed (see Methodology).