As a center of learning, innovation and leadership that shapes and advances correctional practice and public policy, the National Institute of Corrections (NIC) devotes a portion of its focus to the critical needs of justice-involved veterans.

The National Institute of Corrections first veteran-specific project was a collaborative effort with author Bernard Edelman of Vietnam Veterans of America to develop a white paper on Veterans Treatment Courts (VTCs). This publication served as a how-to guide for jurisdictions looking to implement or improve upon an existing program and to bring awareness to the unique issues of justice-involved veterans.  Veterans Treatment Courts: A Second Chance for Vets Who Have Lost Their Way and its executive summary was officially released in a live webinar event on May 17, 2016.  This publication served as a platform for all NIC veteran-specific initiatives, including a live national broadcast bearing the same name as the publication.

In December 2016, the National Institute of Corrections officially established the Justice-Involved Veterans Network (JIVN).  The JIVN is a cross-divisional effort among the community services, jails, and prisons divisions of the National Institute of Corrections in partnership with the U.S. Department of Veterans Affairs and the Substance Abuse and Mental Health Services Administration (SAMHSA).   The network is inclusive of the continuum of criminal justice that includes leaders at the federal, state, and county levels. Ultimately, the network looks to improve safety for law enforcement, community supervision officers, and the public while improving outcomes for veterans throughout the criminal justice system.

About the Veterans Compendium Project

NIC is looking to extend the veterans treatment court white paper project to include more of the continuum of criminal justice—from arrest to local jail, and then on the backend of the criminal justice system with prison and reentry.  NIC's next project focused on the promising and innovative practices in local jails and state prisons focusing on justice-involved veterans; how the Veterans Administration interacts with both settings, works with justice-involved veterans, assists with benefits, continuity of care, and links to services (e.g., treatment, housing, etc.).

Barracks Behind Bars: In Veteran-Specific Housing Units, Veterans Help Veterans Help Themselves was officially released on May 17, 2018 during a live event held at the Library of Congress in anticipation of and in support of PTSD Awareness Month.  The publication also includes the sequential intercept model adapted to the veteran population with resources for each intercept. The sequential intercept model was developed by Mark Munetz, MD, and Patricia A. Griffin, Ph.D., in conjunction with the GAINS Center for Behavioral Health and Justice Transformation, a division of the Substance Abuse and Mental Health Services Administration (SAMHSA). The model provides a conceptual framework for communities to organize targeted strategies for justice-involved individuals with behavioral health disorders.

NIC worked collaboratively with SAMHSA, the U.S. Department of Veterans Affairs (VA), and members of the Justice-Involved Veterans Network to adapt the model for the justice-involved veterans population.

NIC’s next phase of the veteran compendium project will focus on law enforcement practices that improve outcomes for veterans in crisis in the community.  This white paper will also address specialized training for law enforcement officers around veteran specific issues, including military culture and mental health issues relating to military service.  The project team completed 4 site visits, including Raleigh, North Carolina, New Castle County, Delaware; Dayton, Ohio; and Salt Lake City, Utah. A first draft of the publication was received on May 15, 2018. NIC and project members will begin the editing process and anticipates an FY19 release.

We identify common themes while at the same time respecting the nuances of each of the sites featured in the publications.  We gather information through interviews with corrections personnel, law enforcement, veterans/inmates, community members, and the VA Specialists (Veterans Justice Outreach and Health Care for Reentry Veterans) who work with justice-involved veterans throughout the continuum of justice. 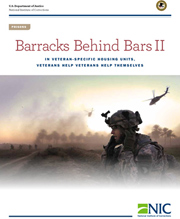 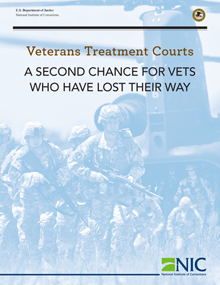