6a: Measuring Your Performance

In general, performance measures for the justice system fall into four categories:

Development of performance measures should involve a variety of stakeholders. At a minimum, the leadership of the various components of the justice system, along with some line level representatives, should be part of the process. The leadership can provide the broad systemic perspective about how the system should be performing under an EBDM initiative and how each agency/entity within the justice system contributes to overall system performance. The inclusion of line personnel, however, provides a different level of detail and, to some extent, a reality check about how the system is currently performing and what the capacity is for performance. Participants should also include representation from groups that have an interest in the justice system—city/county government budget officers and managers, health/mental health treatment providers, etc. The community and the media can also be important stakeholders to include as, ultimately, it is through these groups that performance is communicated and legitimacy is established. The point is that for performance measures to have validity (not necessarily in the statistical sense), they must be meaningful for others who judge the performance of the system.

Jurisdictions may wish to consider engaging an outside facilitator with experience in performance measurement to provide guidance and assistance through the process. Local universities are an excellent resource for finding this kind of assistance.

To develop and implement performance measures, the stakeholders identified above should undertake four key steps:

Detailed guidance for each of these steps is provided below.

The first step for articulating performance measures is to define what is meant by “optimum performance,” i.e., establishing harm reduction goals and objectives for the criminal justice system. Several questions can help focus the discussion on what the jurisdiction hopes to accomplish:

The answers to these questions need to then been articulated in terms of quantifiable goals and objectives. It is important to understand that goals and objectives are not synonymous. Goals represent the desired end result of the system. Objectives define the short-term indicators that demonstrate progress toward goal attainment and that describe who or what will change, by how much, and over what period of time. For example, broadly stated, one goal might be that the recidivism rate be no higher than 20%. An objective might be a 5% annual decrease in the percentage of offenders who commit new offenses in a three-year period.

Another important consideration in defining goals and objectives is adherence to the SMART principle:

Once goals and objectives have been defined, the stakeholders should compare them to the impacts and outcomes identified in the system-level logic model. Each goal and objective should align with the intended impacts and outcomes articulated in the logic model. Although there does not need to be complete overlap, there should be no contradictions.

The second step in defining performance measures encompasses a number of activities:

Well-articulated goals and objectives should lend themselves nicely to the identification of key indicator data. Using the worksheet in Appendix 1, jurisdictions will need to “break down” the goals and objectives into specific types of data that can be collected. Using the example from Step 1 above, the table below shows the goal, the objective, and the types of indicator data that are needed to measure performance:

As indicator data are being identified, jurisdictions should note if the data already exist; if so, they should identify who “owns” the data and, if not, they should determine whether the capacity for obtaining the data exists. To the extent that data is not already being collected or the capacity to collect the data does not exist, consideration should be given to the relative importance of the indicator. This next step in the process will help refine the list of performance measures.

An ideal performance measurement system must be manageable; as such, the number of performance measures for each goal and objective should be limited. Generally, there should be no more than three or four measures per goal or objective and, in fact, there may be fewer. Jurisdictions should aim to select those measures that are the strongest indicators of performance for which data already exist or for which the capacity for the data to be collected is in place. In refining the list, it is important to consider the following seven questions:

The question of performance targets is a particularly important one and requires more than a simple “yes/no” answer. As the list of measures is refined, jurisdictions should begin thinking in terms of what the specific performance targets should be. In other words, what is the “magic number” that demonstrates optimum performance? For example, if the intent is to implement pretrial risk assessments in order to decrease jail operating costs, the performance target might be that 90% of release decisions are consistent with assessment results. The logic model may provide some guidance in answering this question.

Once the data collection plan has been agreed upon by the key stakeholders and the agencies/persons that will be responsible for collecting the data, the jurisdiction should collect baseline data for each performance measure against which progress can later be measured.

It is rare that the data in raw form will be sufficient for assessing performance; quantitative analysis of the data is generally needed. The quantitative analysis will require basic statistical calculations such as ratios, percentages, percent change, and averages (mean, median, or mode). In some instances, depending on the measures selected, more complex statistics will be necessary and may require the involvement of persons with statistical analysis experience. Employees in the city/county manager’s offices may be resources, or even employees within criminal justice agencies that have analysis units. Local universities are also good resources for statistical analyses.

The actual performance measures selected by the jurisdiction should be reflective of the goals and objectives that the stakeholders have identified as part of the EBDM initiative. The following list of possible performance measures are provided for illustrative purposes only:

Once the performance data is collected and analyzed, it should be reported to stakeholders in a clear and easily understood manner. Although there is no wrong or right way to report data, the following list of reporting formats should be considered:

Jurisdictions should also establish a regular mechanism for communicating and discussing performance that includes target dates for the release of information. Possible mechanisms include

In addition to developing a scorecard to communicate to the public its progress in reaching its harm reduction goals, Milwaukee County’s policy team is also developing a dashboard for use by its policy team and its more immediate stakeholders involved in the EBDM initiative.

The dashboard will serve as a managerial tool that provides a quick snapshot of the County’s progress towards its short-term goals. 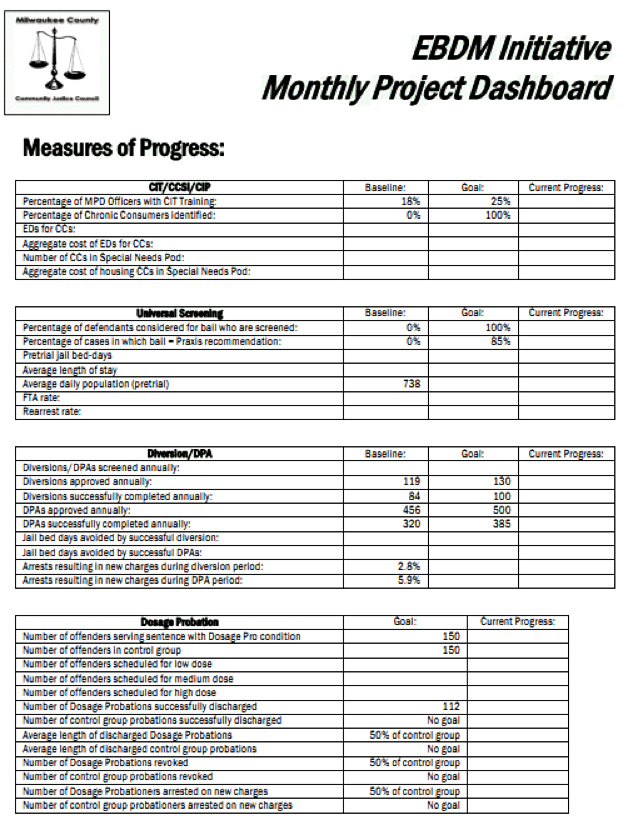 Goal: Safely release and/or supervise 15% more pretrial detainees in the community rather than in jail, generating at least $1,000,000 in savings that can be reinvested in the community and, at the same time, reduce by at least 40% the already low rates at which defendants waiting for trial fail to follow pretrial rules.

Goal: Divert or defer prosecution in 10% more cases than we do currently, holding offenders accountable, compensating victims, and reducing recidivism, while generating at least $350,000 in savings that can be reinvested in the community.

Goal: Demonstrate in a pilot project that by terminating probation as soon as an offender in need of treatment has received sufficient treatment, we can cut the cost of probation by at least 50% and at the same time reduce probation recidivism by 50%.

Hoyle, B. (2011). Dashboards help lift the ‘fog of crime.’ Retrieved from https://docplayer.net/13839392-Dashboards-help-lift-the-fog-of-crime-by-chief-bence-hoyle.html

This glossary defines key terms that are commonly used in the criminal justice field.[3]

This glossary defines key terms that are commonly used in the field of cost-benefit analysis. These terms are taken in whole from the Cost-Benefit Knowledge Bank for Criminal Justice (CBKB)[7].

[1] Satisfaction can be measured on different levels but generally represents the satisfaction of justice system “consumers” such as victims, witnesses, and defendants. However, in certain instances, it may be desirable and important to measure satisfaction among those working in the justice system.

[2] For more information on developing a scorecard, see 6b: Developing a Systemwide Scorecard.

[3]Definitions noted with an asterisk (*) are drawn in whole or in part from BJS’s terms and definitions: http://bjs.gov/index.cfm?ty=tda.

[5] For purposes of this initiative, “goal” is synonymous with the term “impact” in the logic model.

[6] “Objective,” as it is used here, is synonymous with the term “outcome” in the logic model.