Chapter 3 - Maintaining and Sustaining a CJCC

There are many tools that aid in running effective Criminal Justice Coordinating Council (CJCC) meetings. This section will provide a high-level review of various resources for making CJCC meetings efficient and effective.

The CJCC should meet regularly, either monthly, bimonthly, or quarterly. A schedule of future meeting dates and times should be agreed upon well in advance of the meetings. The meetings must be well organized and involve action items reflective of the decision makers who attend.

The location of the meeting can be a surprisingly important decision. Particularly if your CJCC involves members from various locations across a large geographical area. The meeting location can also be a tool to suggest neutrality. Pick a meeting location that makes it easy for CJCC members to attend.

A clear agenda, delivered well in advance, will promote attendance. The agenda should include items that are clearly relevant to the participants. Informational matters and operational-level concerns should be minimized so that policy-level discussion and action can take place. As a general rule, the CJCC does not meddle in the internal affairs of any single justice agency. Agenda items focus on issues that cut across agency interests or operations. Typically, this shifts the emphasis away from looking at individual agencies and refocuses attention on the decision points where they come together to do their work.

In most CJCCs, the chair develops the agenda in concert with the staff. Members are encouraged to submit agenda items to the staff and/or the chair. They have an obligation to do so if an upcoming initiative is likely to affect other parts of the justice system.

Bylaws typically include requirements related to notice of action items on an agenda and posting of meetings.

You can find examples of meeting documents here.

Helpful hint: If you have an important topic on your agenda, highlight this in the meeting reminder to encourage rich discussion and a high level of attendance.

When recorded effectively, meeting minutes provide an official record of the CJCC’s actions and document rationale for the decisions that were made.  Ideally, minutes help a CJCC track progress toward goals, detail future plans and action items, and serve as a reference point.  Minutes can also be used to update people who could not attend the meeting with information about what happened at the meeting.

At a minimum, the following information should be included in the minutes:

For more information on best practices, see A Complete Guide to Board Meeting Agendas (with Templates)

There are times when the CJCC may move into executive session and close the meeting to the public. State Open Meetings Acts provide circumstances and guidance regarding these closed sessions.  Typically, a separate set of minutes are taken but not made available to the public and retained by the public body for a designated period of time.

Roberts Rules of Order is a manual that sets out parliamentary rules that CJCCs can adopt as a guide for establishing the conduct of the group and management of its meetings. Roberts Rules provide guidance for most organizational functions, including establishing an organization and rules that govern it, presiding over and participating in meetings, making motions and debating those motions, and calling for and conducting elections.

Below is a Roberts Rule’s cheat sheet. You can also find a guide to using Roberts rules here.

Henry Martyn Robert served as a civil engineer in the U.S. Army, where he was called on to preside at meetings and developed a pocket manual of parliamentary procedure originally published in 1876 known as Roberts Rules of Order.  Since then the manual has seen eleven revisions. 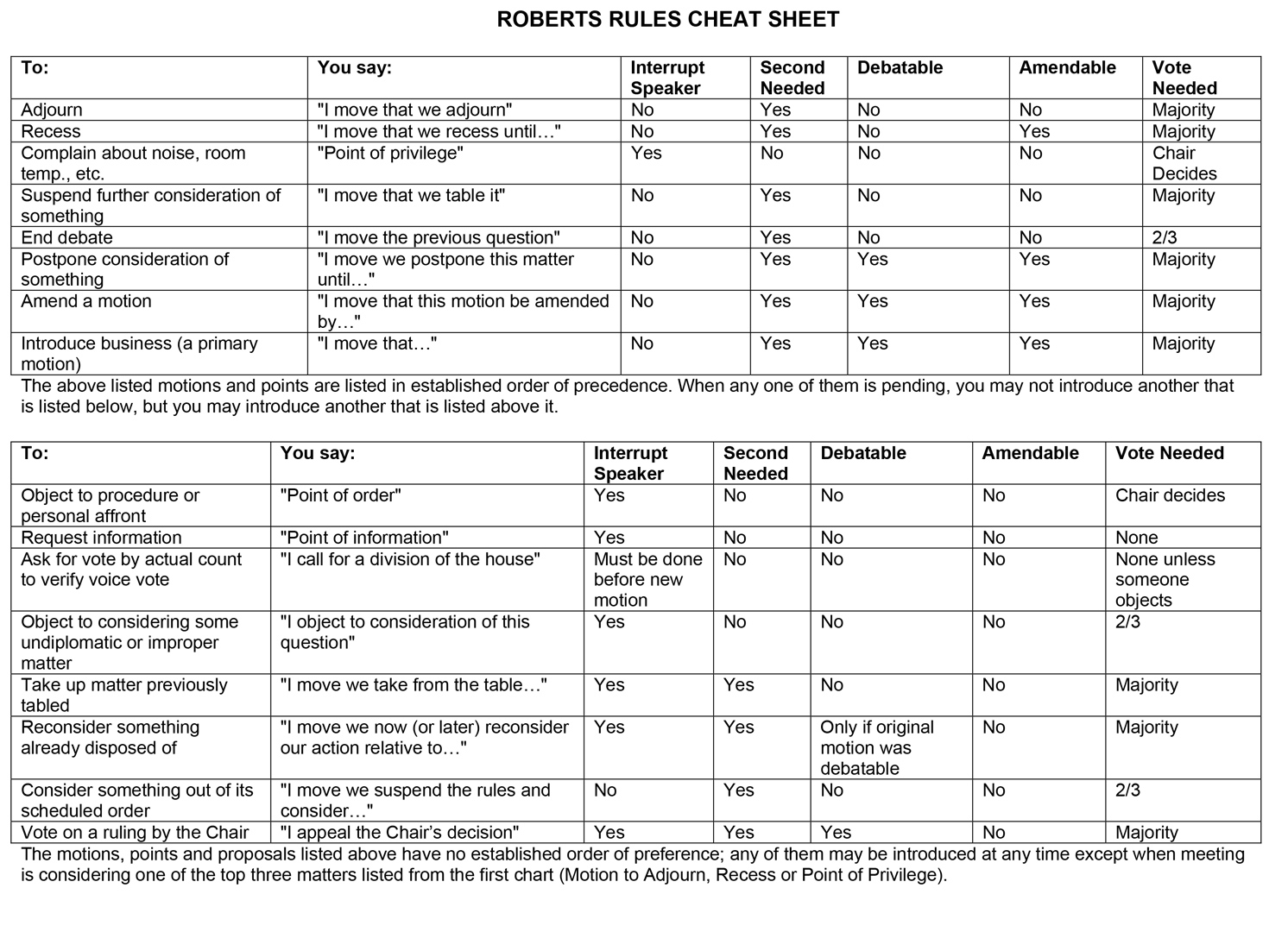 Consensus decision making can be used as an alternative, or as a hybrid, in conjunction with Robert’s Rules. There are multiple models on how to make decisions by consensus. The models vary in the amount of detail the steps describe and how decisions are finalized. The basic model involves collaboratively generating a proposal, identifying “unsatisfied concerns,” and then modifying the proposal to generate as much agreement as possible. Consensus decision making includes the input of all stakeholders and provides an opportunity to address potential concerns, generates as much agreement as possible to set the stage for greater cooperation in implementing decisions and promotes a collaborative atmosphere that fosters greater group cohesion and interpersonal connection. The level of agreement can range from unanimous agreement to one where the person in charge decides. Typically, CJCCs that use the consensus model apply a majority threshold, such as 80 percent.  Typically, an agreement is reached prior to any decision making that members who are not part of the majority and “do not get their way” will agree to publicly

An Initiative of the National Institute of Corrections