The number of people on community supervision is rising, yet budgets of agencies monitoring these individuals are not necessarily increasing at the same rate (DeMichele & Payne, 2007; DeMichele, Payne, & Matz, 2011; Durlauf & Nagin, 2011). Community corrections agencies, as well as other justice system entities, are continually asked to do more with less and demonstrate that they are implementing practices that have been shown to reduce recidivism (Burrell & Rhine, 2013).

Fortunately, a growing body of literature exists on cost-efficient practices that are proven to reduce offender risk (National Institute of Corrections, 2013). Yet, despite the resounding discussion of evidence-based practices (EBP) on the national level, knowledge about and understanding of EBP by those who are doing the work at the local level is still not sufficient to implement and sustain this new way of doing business.

The Eight Prinicples for Risk/ Recidivism Reduction are one of three domains in the Integrated Model (displayed at the bottom of this page) that help community supervision agencies build learning organizations that reduce recidivism through systemic integration of evidence-based principles in collaboration with community and justice partners. 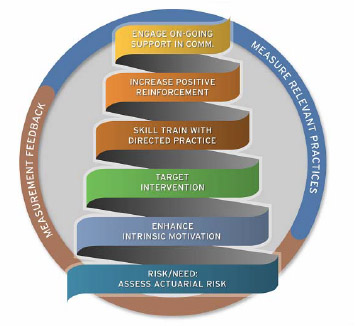 The Integrated Model incorporates eight evidence-based principles that, when implemented with fidelity, have been shown to reduce offender recidivism. While the goal of reduced recidivism is the ultimate outcome measure of offender supervision, there are intermediate outcome and process measures that can help organizations monitor their progress towards achieving that ultimate goal. The National Project Team developed this tool as a means of describing those measures and differentiating between those which are required versus recommended. For each measure, the tool identifies measure components, defines those components, identifies potential data sources, describes the data in detail, identifies collection frequency and identifies potential data collection agencies. The Integrated Model and its image were developed with funds provided by the National Institute of Corrections. It can be found in Implementing Effective Correctional Management of Offenders in the Community: Outcome and Process Measures (021041).

To grow and thrive, if not survive, going forward, community corrections agencies and justice systems must have the capacity to undergo a significant shift in their business practices and organizational culture—built on a framework of implementing EBP (Crime and Justice Institute at Community Resources for Justice, 2009; Dowden & Andrews, 2004; Latessa, Listwan, & Koetzle, 2013).

Denise will share her thoughts on preparing the organization (WI DOC) to adopting evidence- based practices.

Colleges and universities can play a crucial role in helping community corrections agencies move forward with EBP by introducing students to this body of research (Soydan, 2007).  However, we know that new research emerges over time, and new evidence is revealed that can support or challenge previous findings (McNeill, Farrall, Lightowler, & Maruna, 2012). Therefore, it is also important to teach students how to read and examine research in criminal justice studies and distinguish between findings that are evidence-based, promising, etc. Having a familiarity with the concepts of current EBP at the time of graduation and entry into the workplace would provide them a definite advantage during the interview and hiring process, particularly as more agencies  prioritize and select candidates for hire by assessing jobseekers’ general knowledge and understanding of these principles for reducing recidivism.

Criminal justice degree programs should introduce students to literature focused on  evidence-based practice for reducing recidivism, as well as include opportunities for students to review, analyze, and critique research literature. Overall, community corrections leaders want entry level workers to have been exposed to the history of criminal justice research outcomes, yet also be well informed of current research about what works and doesn’t. They also want students to have a general appreciation of how research evolves, know where to quickly find applicable research literature and links, and have the capacity to distinguish between research informed practices, practice based on evidence based research, or promising practice, etc.

William identifies some of the primary skills and practices needed to successfully implement EBP.