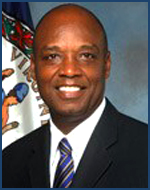 The presentation by nationally renowned Corrections Director Harold Clarke introduces new concepts to transform a correctional agency in a way that creates a healing environment for staff and offenders with the ultimate goal of lowering recidivism and increasing long term public safety. Effectively reducing recidivism and implementing evidence-based practices requires a new paradigm for correctional professionals that must begin with examining the agency’s culture and its ability to support change. The presentation shares a new vision, inspires others to change attitudes, challenges participants to question traditional paradigms and presents methods that can be replicated by others.