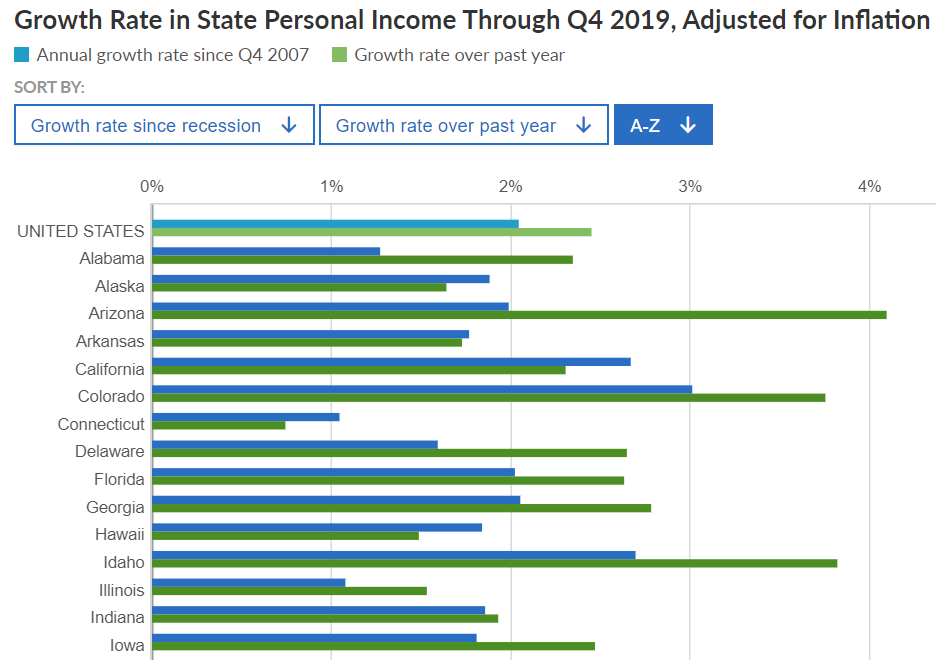 Fiscal 50: State Trends and Analysis, an interactive resource from The Pew Charitable Trusts, allows you to sort and analyze data on key fiscal, economic, and demographic trends in the 50 states and understand their impact on states’ fiscal health.

The coronavirus outbreak in early 2020 was expected to abruptly end the longest U.S. economic expansion on record and with it one of the most promising periods for states’ finances in years. Long-running pressure on state budgets had eased in 2019 amid widespread economic growth and tax revenue gains that led to the first budget surpluses in years in many states. Still, some states were in a stronger position than others as they were about to face a public health emergency and their greatest fiscal and economic test since the Great Recession of 2007-09.

The vast majority of states posted healthy tax revenue gains for July–December 2019, the first half of most states’ current budget year. As of the third quarter of 2019, tax collections in 44 states were higher than at their peaks early in the last recession, after adjusting for inflation. The recent surge in tax revenue had led many to add to their rainy day funds, which as of mid-2019 could cover a larger share of spending than before the previous recession in at least two-thirds of states.

The economy and employment rates were on the upswing through the close of 2019. For the second consecutive year, every state experienced gains in its economy as measured by state personal income—the first time that had happened in more than 10 years.