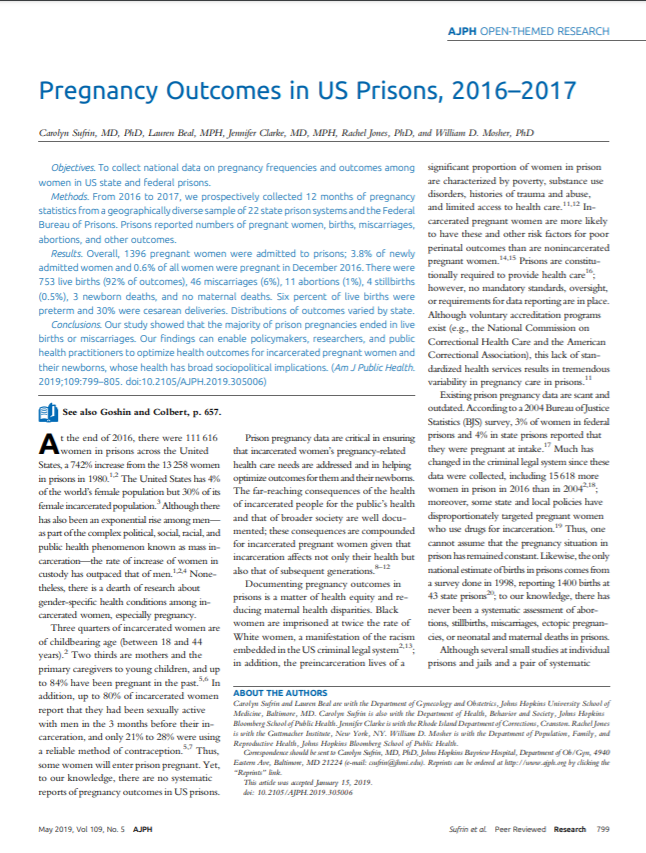 At the end of 2016, there were 111,616 women in prisons across the United States, a 742% increase from the 13,258 women in prisons in 1980. The United States has 4% of the world’s female population but 30% of its female incarcerated population.  Although there has also been an exponential rise among men— as part of the complex political, social, racial, and public health phenomenon known as mass incarceration—the rate of increase of women in custody has outpaced that of men. Nonetheless, there is a dearth of research about gender-specific health conditions among incarcerated women, especially pregnancy.

Three quarters of incarcerated women are of childbearing age (between 18 and 44 years). Two thirds are mothers and the primary caregivers to young children, and up to 84% have been pregnant in the past. In addition, up to 80% of incarcerated women report that they had been sexually active with men in the 3 months before their incarceration, and only 21% to 28% were using a reliable method of contraception. Thus, some women will enter prison pregnant. Yet, to our knowledge, there are no systematic reports of pregnancy outcomes in US prisons.

Prison pregnancy data are critical in ensuring that incarcerated women’s pregnancy-related health care needs are addressed and in helping optimize outcomes for them and their newborns. The far-reaching consequences of the health of incarcerated people for the public’s health and that of broader society are well documented; these consequences are compounded for incarcerated pregnant women given that incarceration affects not only their health but also that of subsequent generations.