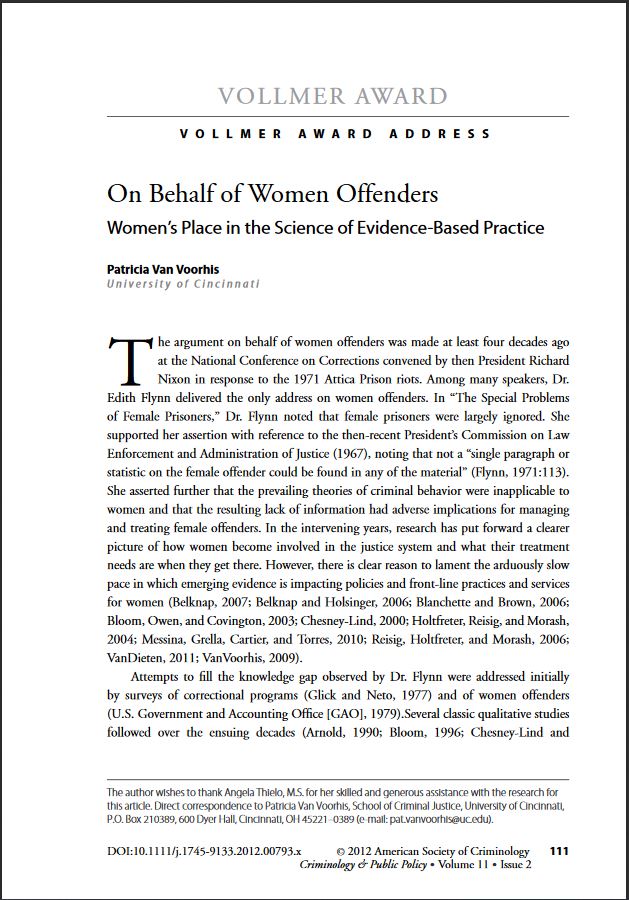 The argument on behalf of women offenders was made at least four decades ago at the National Conference on Corrections convened by then President Richard Nixon in response to the 1971 Attica Prison riots. Among many speakers, Dr. Edith Flynn delivered the only address on women offenders. In “The Special Problems of Female Prisoners,” Dr. Flynn noted that female prisoners were largely ignored. She supported her assertion with reference to the then-recent President’s Commission on Law Enforcement and Administration of Justice (1967), noting that not a “single paragraph or statistic on the female offender could be found in any of the material” (Flynn, 1971:113).She asserted further that the prevailing theories of criminal behavior were inapplicable to women and that the resulting lack of information had adverse implications for managing and treating female offenders. In the intervening years, research has put forward a clearer picture of how women become involved in the justice system and what their treatment needs are when they get there. However, there is clear reason to lament the arduously slowpace in which emerging evidence is impacting policies and front-line practices and services for women (Belknap, 2007; Belknap and Holsinger, 2006; Blanchette and Brown, 2006; Bloom, Owen, and Covington, 2003; Chesney-Lind, 2000; Holtfreter, Reisig, and Morash, 2004; Messina, Grella, Cartier, and Torres, 2010; Reisig, Holtfreter, and Morash, 2006; VanDieten, 2011; VanVoorhis, 2009).